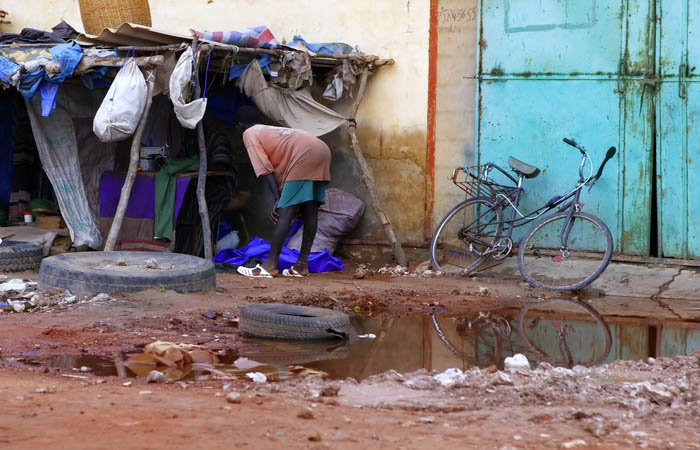 How A Poverty Mindset is Keeping You From Financial Success

During my time living in and traveling around Southeast Asia, I encountered poverty like I had never before seen. I hadn’t traveled extensively before our expat assignments in Shanghai and Seoul and it was an eye-opening experience for me.

Of course, I knew that poverty existed. But simply knowing that something exists is a far cry from seeing it in person. An especially poignant experience was when we traveled to Siem Reap, Cambodia with our oldest daughter, who was 3 years old and our son, who was just a year old.  This was our first “big” vacation and we were shocked by the humble circumstances. The homes were modest and it was clear that clothing and shoes were scarce commodities. We spent more on this trip for our family than the total annual living wage in the country.

But in their underprivileged circumstances and in many other places we lived and traveled, the people were grateful and appreciative of the things that they had. In a previously war-torn country like Cambodia, they were simply grateful for safety and to have the necessities of life.

I dare say that they seemed happier than a majority of Americans of varying socioeconomic statuses. I wondered…if a typical Cambodian family visited the United States, what would they think of Americans? I think that they would be astounded at the wealth, but they would not be impressed by the attitudes toward it and the level of happiness most people have, despite the abundance.

Our country has the greatest opportunity of any country in the world for its people to have financial security, and yet it eludes so many people. This is shown by the extreme lack of saving. In fact, 38% of American households making $40,000-$100,000 per year could not cover $400 for an emergency without going into debt according to a recent Report on the Economic Well-Being of U.S. Households.

I’m not just referring to situations of real, genuine poverty where people are on welfare assistance and cannot cover their own basic needs. I’m referring to those with low, mid and high incomes that live with a poverty mindset. Those that live paycheck-to-paycheck or live on even more than their current income, most of which have an opportunity to improve their financial situation.

Because the truth is, you can make six figures and still have a poverty mindset.

Poverty is a state of mind.” (Gandhi)

If you’re not familiar with the term “poverty mindset”, let me give you a few examples here. Someone with a poverty mindset might:

Do you recognize any of these traits in yourself or those that you know? Unfortunately, it’s really very common in our society.

HOW A POVERTY MINDSET IS AFFECTING YOUR FINANCES

I was extremely fortunate that even though I grew up fairly poor, my parents never made us feel like we were poor. My mom was extremely frugal out of necessity. We hung clothes to dry outside, used a wood-burning stove to heat the house and shopped at thrift stores.

I never felt like we didn’t have enough. There was gratitude for the things that we did have and jealousy and resentment toward those that had more were not found in our home. I didn’t really realize how poor we were at the time, until later starting out on my own.

In contrast, someone with a poverty mindset truly believes that they cannot or should not be wealthy. So what happens when money comes into their life? They spend it, and not necessarily on things that will improve their life. Furthermore, someone with a poverty mindset does not generally seek out personal development to improve their work situation.

After all, the true measure of wealth is not how much money you make, but how much you save. Financial success is nearly entire due to mindset, not your income level.

Not earning enough money is not necessarily the problem here. I’ll say it again: you can make six figures and still have a poverty mindset.

Who is really better off? The person near poverty level that works hard to make a better life for themselves and has a good attitude toward life? Or the person that makes more than enough income to meet their needs but is bitter and angry toward those that have more and never feels like they have enough? I will argue that it’s the former.

WHAT YOU CAN DO TO OVERCOME IT

Fortunately, it is possible to overcome a poverty mindset. These attitudes and behaviors are often passed down from generation to generation, so you could be the one to break the cycle in your family.

If you can dream it, you can achieve it.”

You have to believe in yourself to be able to overcome the poverty mindset. One thing you can do is to find someone that is wealthy that you can look up to as a role model. Find out what it would take to achieve what they have achieved and set personal and financial goals.

Take personal responsibility for your actions and avoid thinking that anything is owed to you. Learn everything you can and especially learn how to save! Visualize how your life will improve when you are able to have the security of an emergency fund and savings for the future. In summary:

Be grateful.
Stop judging others.
See your own potential.
Work hard to achieve your goals.

The opposite of poverty is abundance. Just as poverty is a state of mind, so is abundance. Remember that wealth isn’t just a number to achieve, it’s freedom from worry about having enough, being able to make ends meet and a peace of mind that money can buy.

Have you ever experienced a poverty mindset? How did you overcome it?

We use cookies to optimize our website and our service.
Manage options Manage third parties Manage vendors Read more about these purposes
Preferences
{title} {title} {title}